As a reflection of its sulphur springs and volcanic peaks, Saint Lucia is a bubbling and bewitching island. It has a wonderful diversity of natural habitats, including some 25,000 acres of protected forests, estuaries and mangrove sites as well as a 160 km coastline interspersed with enchanting inlets and beautiful coral reefs. While the north of the country is marked by seaside tourism with plenty of marinas and hotel complexes, the southern part is best suited for visitors seeking a genuine wilderness experience. It also is in these places that encounters with locals are the most meaningful and warm, swaying to the rhythms of steel bands and the charming English Creole accent. The West Coast and its marine reserves offer optimum conditions for water activities, cetacean watching, snorkelling and scuba diving. Leisure crafting is certainly the most pleasant option to enjoy the wild splendour of the island, especially along the West Coast, which has a number of organised and wild moorings. 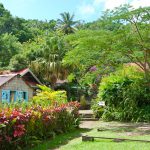 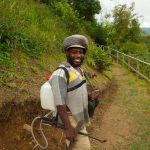 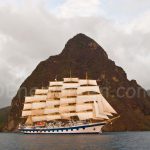 Idyllic mooring in the Bay of Soufrière » Sailing 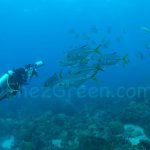 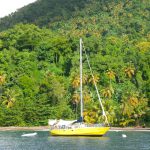 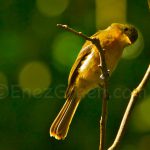 Located in the south of the Eastern Caribbean Chain, between Martinique and Saint Vincent, Saint Lucia is part of the Windward Islands, an array of southern islands standing in a north – south line between Dominica and Trinidad and Tobago which are exposed to the Atlantic trade winds.

Saint Lucia is a wonderful mountainous island emerging from an underwater landscape. It is characterised by unique topography and astonishingly beautiful landscape. The two volcanic pitons of the Soufrière are the emblems of the island and are a UNESCO World Heritage Site since 2004. Gros Piton and Petit Piton are remnants of eroded lava flows from a volcanic centre of andesitic composition associated with the subduction of the Earth’s tectonic plate. These twin peaks rising from the ocean in the south-west of the island nestle in a patch of tropical vegetation where panoramic viewpoints have been laid out. These wonders of nature towering over the island at more than 700 m offer splendid views.

Saint Lucia is 43 km long and 23 km large and covers a surface area of barely 620 km². However, the island has a tremendous diversity of natural environments, including almost 25,000 acres of protected forests, estuaries, mangroves, waterfalls, thermal springs and a 160 km coastline interspersed with enchanting inlets and beautiful coral reefs. While the north of the country is marked by seaside tourism with plenty of marinas and hotel complexes, the steep and lush southern coast, the fishermen’s villages in the south or the tropical forest covering the hinterland of the island is best suited for visitors seeking a genuine wilderness experience.

Saint Lucia has a subtropical climate and pleasant temperature all year round. The average yearly temperature is 27°C and can reach 35°C in the rainy season between June and August. The dry season extends from late November and May. During the cyclonic season from June to end November, St Lucia may be impacted by tropical depressions and storms as well as hurricanes. Tomas, the latest major hurricane, hit the island in November 2010. Besides information provided by the local authorities, it is also possible to keep track of hurricanes on a site based in Miami.

For its part, the Caribbean coast is ideal for swimming and a number of water activities. Scuba diving remains the most thrilling activity and St Lucia is renowned as one of the best sites in the Caribbean, amongst others for the richness of its coral reefs and the topography of its sea floor, with places bearing such evocative names as ‘Superman’s Flight’, ‘Fairy Land’… The marine reserve of Soufrière and Anse Chastenet are among the best diving sites in the Caribbean for their rich and preserved biodiversity. The West Coast is also a great place for the observation of sea mammals, who find a safe haven there. More than 20 species are regularly sighted, the most frequent ones being humpback whales, long-finned pilot whales, sperm whales, spinner and spotted dolphins. You can also see leatherback turtles which come to lay their eggs every year between mid-March and mid-August in Grande Anse, within the east coast marine reserve.

Leisure crafting is certainly the most pleasant option to enjoy the wild splendour of the island, especially along the West Coast, which has a number of organised and wild moorings within well-maintained marinas or heavenly spots. The two most remarkable sites are Marigot Bay, a protected location within rich vegetation, and Soufrière Bay, where you can stay right under the famous World Heritage pitons. St Lucia is the gateway to the Grenadines Islands and the ideal starting point for cruises to neighbouring islands such as Martinique or St-Vincent.

Protection of the Environment by Local Authorities

The decline in the banana sector and a significant drop in revenue have led Saint Lucia to target tourism as its main growth driver. Tourism, however, depends on the sustainability of agriculture which besides providing part of the food and beverages for hotels, is also at the core of the priority given by Saint Lucia to its cultural heritage in an effort to achieve sustainable tourism.

Tourism, the Mainstay of the Economy

Tourism has been the main source of foreign exchange for the last 15 years and contributes nearly 38% of the GDP and 73% of total exports of goods and services. Hotels and restaurants provide employment to 10.2% of the island’s total workforce (Jules 2005). In 2005, Saint Lucia has welcomed 350,000 tourists and 540,000 cruise passengers, who spent a total of over US$1 billion. 35% of visitors came from the USA and 32% from Europe, including 25% from the UK.

The Government’s Commitment to Create a Sustainable Tourism Industry

Significant efforts are being made by government bodies, farmers, fishermen and hoteliers to increase the supply of local produce to the tourism industry. However, some hotel and cruise ship owners tend to secure cheaper and more competitive sources of supply from the USA or Trinidad and Tobago. The government is nonetheless committed to turn St Lucia into “the most diversified and sustainable tourism destination in the Caribbean” by developing sustainable and fair tourism. The importance of maintaining nature as the backbone of this new directive has been identified as a priority. Recognition of the importance of ensuring sustainable marine resources has contributed to the setting up of 23 marine protected areas of modest size around the island, with coral reefs and mangrove areas as the main focus. La Soufrière Management Marine Area (SMMA) is the most concrete example of this approach. The SMMA comprises 4 distinct marine reserves and based on the biosphere reserve concept, which includes protection, management and education of the local population while enabling the development of tourism and fisheries.

The sector has been involved in a number sustainable tourism initiatives focusing on the greening of the industry such as internal environmental audits or the setting up and use of various environmental management and certification programmes such as Green Globe 21, Blue Flag, ISO 14000 and Quality Tourism for the Caribbean. St Lucia is proud to have received the Caribbean Islands’ 2000 Ecotourism Award for its Heritage Tourism programme launched in 2000 in order to engage, train and empower local communities in order to encourage them to use the cultural and heritage assets for tourism development.

Wastewater recycling is now common practice for many hotels, which use their recycled grey water to water gardens and lawns, amongst others the Coconut Bay Resort and Spa and the Sandals Regency, which uses the water for the irrigation of its golf course. St Lucia has almost completed the implementation of its first National Biodiversity Strategy and Action Plan and is one of the rare countries in the Caribbean region to have established a payment system for ecosystem services, which results from a regional project named Integrated Watershed and Coastal Areas Management (IWCAM).

Marine Reserves are established by law to protect coral reefs and the fish living in these areas. Within these marine areas, the coastal belt is divided in a patchwork of areas where activity is regulated. White and blue mooring buoys have been placed in the water and are at the disposal of yachts. An entrance fee is required from users to ensure the autonomy of the reserves, like in the case of the SMMA, which is a successful example in this field. The country is now sharing its experience in setting up a network of marine protected areas with other countries in the Caribbean.

Despite all these efforts, it has to be borne in mind that tourism has developed in St Lucia in a context of the liberalisation of the services market. The General Agreement on Trade in Services (GATS) has in fact highlighted the country’s inability to regulate this sector to the benefit of the population and promote sustainable development. Some thought must be given to the impact of mass tourism, particularly the reception of cruise ships, on fragile marine habitats. It happens that several vessels – each accommodating up to 3,600 passengers – visit a bay at the same time, like at Pointe Séraphine, in Castries. Waste management and wastewater recycling are also becoming an issue with the increasing number of hotel complexes in the north of the island, especially in Rodney Bay and Gros Islet.

The Atlantic Rally for Cruisers (ARC)

Hundreds of sailing boats from all corners of the world race each other every year in this popular transatlantic rally, which is open to amateur and professional crews alike. The race starts in late November from the Canary Islands and after a 12 to 25 days’ crossing, ends in the Rodney Bay Marina in Saint Lucia in December. During an entire fortnight, parties and concerts follow on within the marina itself. The latest editions have seen the number of boats peaking at 250 with a total of 1,500 people from 32 participating countries!

Arawak Indians were the first visitors to settle on the island. They were driven from the island in the 9th century by Carib Indians, a wilder people, who lived there until its discovery by Christopher Columbus in 1502. The French and the British disputed possession of St Lucia for years due to its strategic geographic location, its freshwater springs and its various natural coastal shelters. During that period, possession of the island changed hands 14 times, which earned it the name of ‘Helen of the West Indies’. Saint Lucia was also a hideout for pirates, especially Pigeon Island, which was called ‘Pirate Island’, now a National Historic Park. Situated in the north of the island, it was the ideal place to launch boarding of galleons that sailed past Martinique. For the same reasons, the British Admiral Rodney built a military fort there in 1778. It was from there that boats left to destroy the French fleet during the famous Battle of the Saints in 1782. One can now visit the remains of this fort and an interpretation centre recalls this eventful history.

The famous Jazz Festival takes place over 10 days in May. Launched in 1991 by the Saint Lucia Tourist Board with the aim of drawing tourists to the island is today a resounding success and is even considered one of the most established jazz festivals on the international circuit! Every Saturday in May, the Dennery Fish Fiesta is in full swing in a typical Caribbean ambiance.

Between mid June and end July, the Carnival reaches its climax; visitors can watch parades of costumed groups dancing and singing in the streets. A festive atmosphere is guaranteed!