Dominica is an island where you can immerse yourself in a wild mountain scenery where nature has right of way or visit a seabed formed by volcanic activity and boasting a remarkable fauna and flora. 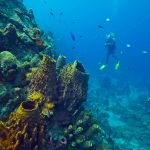 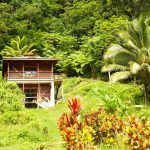 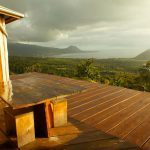 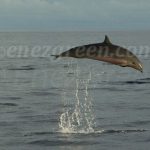 Dominica, the Nature Island with a World Heritage site

Dominica is a land of jagged peaks and forests rising from the sea and stretching over 750 Km2. Plains are very sparse and the landscapes are quite turbulent. Regardless of the trail or road that you take, the panoramas are breathtaking. The highest point of the island, which is only 25 Km large, peaks at 1,437 m, which gives you a hint of the average slope ! The tropical forest covers all the foothills and you experience a feeling of weightlessness in the vegetal world that boasts a multitude of shapes and colours. There is a remarkable biodiversity with not less than 1,000 species of flowering plants, some 60 different plant species per hectare and six types of forests ! The fauna is as rich as the flora with 50 bird species including two parrot species and sperm whales, whales, dolphins, barracudas, sharks, sea horses, lobsters and sea turtles, namely the leatherback turtle, which comes to lay its eggs on the beaches of Dominica.

The chain of mountains is of volcanic origin. You will find torrents and streams almost everywhere and in many places, hot water sources which are great to relax. It takes about three hours on foot through the mountain to reach one of the largest bubbling hot water lakes in the world, the Boiling Lake, an enchanting lunar scenery with an exceptional atmosphere. During the trek, you will be able to admire in the distance the blue waters of the Caribbean Sea or the Atlantic Ocean through openings in the vegetation. The thousands of species that live in the tropical forests of Dominica offer all imaginable shapes like a branch of arborescent fern that hangs above your head like an umbrella in a kaleidoscope of lights. The Morne Trois Pitons National Park is a UNESCO World Heritage Reserve. You will find on this site a rare concentration of remarkable landscapes including 5 volcanoes. It counts a large share of the fresh water that feeds the various torrents and rivers in the south of Dominica. Besides the immense Boiling Lake, there are also some 50 spots where fumeroles and hot water sources of volcanic origin gush from within the. The place is aerial, at some 1,400 m high but only 7 Km away from the sea !

The Caribbean coast is protected from trade winds and offers a number of beaches from the south to the north of the island. There are no vast expanses of white sand like in other places in the Caribbean Arc but Dominica has other attractions for the enjoyment of the sea. You can experience snorkelling and free-diving namely in the south-east of the island between Champagne Bay and Scott’s Head. The place offers calm waters, a weak sea current, good visibility and an attractive seabed. From under the water, you can also see streams of bubbles rising to the surface, as a reminder that you are swimming above a dormant volcano.

Dominica enjoys a mild climate all year round but there is a cyclonic period that generally lasts between July and November. The average temperature range between 21 and 28°C.However, there is also a cooler season between January and June with average temperature ranging between 19 and 27°C and slight rainfall. You should be cautious if you intend to go on a trekking expedition or spend a few days in the mountains as temperatures can drop much below 20°C ; don’t forget to bring along the required equipment.

The topography of the place is not suited for commercial or industrial developments but local authorities have recognised the benefits that tourism development around the discovery of the immense natural wealth of the island can deliver. The population remains traditionally close to nature and is of invaluable help in welcoming the thousands of tourists who visit every day the popular sites that have been adapted to welcome visitors or which remain untouched by human hand. Various accommodation structures equipped with top of the range spas take advantage of the resurgence of hot water sources in the foothills of the volcanoes. Traditional farming practices are centred on cultivating fruits and vegetables of a quality that only few countries can match. A large proportion of the products are cultivated without any chemical treatments. With the growing trend of the consumption of organic produce, the local production is highly valued by tourists and is much sought after on the export market. Energy is generated through hydro-electric power which provides for a clean energy. A number of distilleries produce essential oils from plants such as the bay tree, which are then exported to laboratories which use them for their dermatological properties. The large resorts targeting mass tourism have given way to qualitative accommodation on a small scale dispersed around the island. The locals are doing their best to protect the natural heritage of the island by protecting its landscapes and natural capital. Three marine reserves have been set up in partnership with the Fisheries department along the Caribbean coast to protect the landscape, fauna and flora – in Cabrits in the north, in Salisbury in the centre and the famous Rock’s Head site at the south-west point. To ensure the protection of the seabed and safety to sailboats and pleasure crafts, the west coast has been equipped with mooring sites.

Dominica’s economy depends mainly on tourism and agriculture, mainly bananas, which represents 18% of GDP and employs 28% of the workforce. Services (including tourism) accounted for 58% of GDP and 40% of the workforce in 2002. Reforms have been undertaken to develop the offshore financial services like other regional islands . It is also a flag of convenience.

From 2003, the Government of Dominica, Regions Guadeloupe and Martinique, the French Development Agency (AFD), the French Agency for Environment and Energy Management (ADEME) have considered driving Cooperation a geothermal resource development project in Dominica. Providing export the bulk of electricity production via submarine cable to Guadeloupe and Martinique which are two poles of power consumption growth in the Caribbean.
In 2005, Phase I included a preliminary study of technical and economic framework that took place between Dominique and EDF in France, but also several economic stakeholders.
From 2013, the second phase began with the drilling of first wells. This phase of foreshadowing of production should lead to the assessment of production and subsequently the establishment of a super power plant. Ultimately, the proposed potential output is 100 MW to supply local needs (about 20 MW), lower costs of electric kWh of around 30% for Dominicans and export the surplus production to Guadeloupe and Martinique.

The first inhabitants of Dominica were Arawak people who came from Trinidad and Tobago some 2,500 years ago. Various objects have been discovered on the island, namely pottery works, carved wood, pestles, masks, balsa wood rafts and are evidence of the presence of a form of Pre-Colombian art. The Soufriere site houses various relics. The Arawak people came from South America and settled on the island for a few centuries as from around the year 300. It seems that their cultural and religious influence was spread over the whole of the Caribbean region. They invented the hammock and led a sedentary and peaceful life. Later on, they were chased away and massacred by the Caraib Indians coming from the Orenoque Basin who conquered the whole of the Lesser Antilles.
When Christopher Columbus landed in Dominica in 1493, there were only Caraib Indians left on the island, which was later the object of much coveting due to its fertile land and for the quality of wood in its forests. This became the excuse for battles between the British and the French for the control of the island. It is to be noted that slavery in Dominica was abolished in 1807 and that the island gained its independence on 3 November 1978.