Large coral rings barely rising above the water and spread out like bluish confetti on the ocean surface… Waters hiding the wealth of big fish and the most beautiful coral gardens in Polynesia.

Lost in the middle of the Pacific Ocean, the Tuamotu islands (meaning ‘remote islands’ in Polynesian language) are an archipelago that offers an incredible navigation area and sensational diving experiences.

The Tuamotu is a set of islands formed between 40 and 60 million years ago and stretch over a surface area the size of Europe. There are 76 coral islands, atolls, which are characterised by a rich marine biodiversity.

Fakarava and its adjoining atolls are a true marine paradise and have been declared a Biosphere Reserve of the Tuamotu islands. 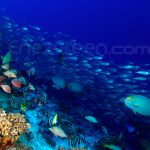 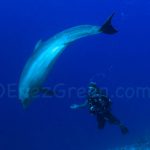 Dive of exception with Yves Lefèvre in Rangiroa » Diving 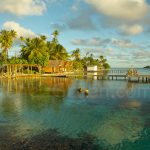 The atoll, an island of a peculiar type

The Tuamotu islands are made of large coral, and sand rings scattered in the immensity of the Pacific Ocean. The archipelago counts 76 atolls (out of the 425 atolls that exist on Earth!). Small, big, round, oval or rectangular, they are aligned over 1,500 km along a South/East-North/West axis. Their size can be generous, like Rangiroa which measures 83 km long and 33 km large. It is large enough to accommodate Tahiti in its lagoon! Fakarava stretches over 60 km long and 23 km large and is not far behind. It is almost like a small interior sea with emerald-blue waters.

The atoll, an unusual geologic formation

The Tuamotu islands are located above a submarine fault which is where the Pacific and Nazca tectonic plates meet. The Nazca Plate runs up to the coast of Chile. The area is unstable and has potential for volcanic activity at frequencies that are similar to when the world was created. The fact remains that in place of the lagoon area enclosed by the Rangiroa Atoll there was once a mountain over 2,000 metres high, to the periphery of which an underwater reef emerged from the sea. The movement of tectonic plates caused the collapse of the islands into the sea, and only the reefs remained. Life continued on these reefs and grew towards the light as their supports gradually sank into the ocean. This is striking evidence of the capacity for resilience of living organisms.

The archipelago enjoys a hot subtropical climate all year round with over 3,000 hours of sunlight a year. The average yearly temperature is 26 °C. There is no climatic period with very high temperature; the Tuamotu islands always have a temperate climate thanks to the ocean. Moreover, the low-lying landscape does not represent an obstacle to breeze or wind circulation, as is the cases in certain high islands. A more humid period runs between November and April, during which cyclones or strong tropical depressions with heavy rainfall can still occur. These storms are, however, monitored and the different are put on alert if required. Yearly rainfall varies between 1,200 mm and 2,500 mm.

Water temperature is rather constant and varies between 26 °C and 29 °C according to the time of the year.

The pass, the lung of the atoll

The coral ring at a low height above sea level is notched by some 30 metres deep passes which provides openings on the ocean, as well as a multitude of small channels, the ‘hoas’, which are flooded by seawater with each rising tide.

The passes are located at the position of the beds of ancient rivers that flowed from the foothills of islands that have since disappeared. Freshwater flows, then sea currents that took over, have thus prevented the implantation and development of living organisms, particularly corals. The passes are governed by the rhythms of the moon, which cause an average drawdown of some 60 cm in this region. This tide phenomenon causes the atoll to empty and fill again partly every six hours. This form of breathing causes a strong current as strong as 8 knots in the pass! This current is essential for the propagation of life in the oceans and is key to the presence of a remarkable biodiversity in these places.

The dispersal of larvae increases the geographic range of the species, which explains that a few kilometres of reefs host so many species.

French Polynesia thus has 800 species of fish. For the same reasons, the inhabitants of the Tuamotu islands have settled in the vicinity of the passes where their essential food source, fish, is more easily available.

The Polynesian people have belatedly become aware of the potential of the atolls due to their uniqueness and natural beauty. Fishing has allowed the capture of a number of varieties of fish but scuba diving has enabled the collection of more precise data. In the 1980s, scuba divers explored the depths of the ocean and listed the sites, particularly the passes. They then discovered that there were amazing concentrations of fish in Polynesian waters. The concentrations of beautiful grey reef sharks (Carcharhinus amblyrhynchos or raira for the Tahitian people) are the most impressive of the various species of sharks present. Hundreds of these sharks gather in the passes and are among the largest concentrations of sharks in the world. Nowadays, scuba diving is a major element of economic development. French Polynesia, in particular the Tuamotu islands, is ranked among the Top 10 diving destinations in the world. It is in fact considered that three quarter of the biodiversity of this part of the Pacific are concentrated around the main passes.

Various activities are also being set up, namely sailing by boat rental or charter service, sea kayaking or even snorkelling.

Given the geographic configuration of this part of the Pacific, fishing remains a major economic activity. It is mainly artisanal fishing that is often organised around fixed fish-aggregating devices installed in the open sea.

The production of copra (dried coconut kernel) is among the traditional activities that are still being practised. Once collected and dried, the copra is sent to a processing plant in Tahiti to extract oil that is used in particular to produce Monoi, which means ‘scented oil’. Furthermore, pearl farming has developed in the 1980s. After having depleted the stock of wild oysters, whose pearls served as a medium of exchange after the arrival of Europeans, pearl oyster farming took over. Nowadays, tens of farms are operating on the different atolls of the Tuamotu islands. Finally, tourism has become a major component of the economic development of the islands with the advent of air transportation. Tourism figures, however, remain modest as the total number of visitors to French Polynesia is lower than those of a small island like the French National Park of Port-Cros, in the Mediterranean.

The quality of knowledge of the early Polynesians in terms of marine navigation remains to date remains an enigma. There is no doubt that these people have travelled across the Pacific long before the first Westerners discovered these enchanting islands. In those times, the means were primitive and navigation could only be done by developing techniques based on the observation of nature.

Various models of pirogues were observed and drawn by the first European people who visited these islands. One of these was the Tuamotu pirogue, which was perfectly adapted to navigation in the lagoons. It was made of two hulls bridged by beams and a floor on which a hut built with plant material provided shelter to the occupiers. Two masts held the sails made of plant material.

The first European to reach the Tuamotu islands was Magellan in 1521. He was followed by the Portuguese navigator, Pedro Fernandez de Quiro in 1606. Then came the famous Dutch navigator, Le Maire who, after having rounded Cape Horn, discovered the atolls of Takapoto, Takaroa, Manihi and Rangiroa, amongst others. The archipelago, which became a French possession in 1880, suffered from a poor reputation with navigators, even the most famous of them. William Schouten called them ‘bad waters’ in 1616, Jacob Raggeveen said they were a ‘Labyrinth’ in 1922 and for Louis Antoine de Bougainville in 1768, they were a ‘dangerous archipelago’. The Paumotu islands, meaning ‘low-lying islands’ in the local language, were not easy to locate and their reefs that barely rise above the water were particularly feared.

The arrival of Europeans changed the lives of the inhabitants of the atolls, the Paumotu people. Food resources were even impacted; even if fish is still an essential part of the activity and of the people’s diet, the situation is different regarding food crops. Recent archaeological excavations have revealed traces of pits used for growing vegetables such as taro. The plants that were present in large quantities on these islands at the time were used to produce humus that was placed in the pits to compensate for the poor quality of the soil, which is essentially sand and corals. Unfortunately, for economic reasons at the time, coconut trees were planted, as was the case in many other islands of the Pacific. These trees developed at the expense of endemic plants, and food crops gradually shrivelled to nothing. The impact can still be felt nowadays as fruit and vegetables that are sometimes grown thousands of kilometres away have to be brought in by boat at great expense.