Ouessant emerges from the waves rushing of the Iroise sea to over 20 km off the coast of Finistere. This land of heather and moorland is overlooked by five lighthouses. Besides its wild beauty, the island stands out for its history marked by the courage of women, by shipwrecks and by tales of long distance journeys. Enez Eussa, which means « the highest island » in Britton language, offers rough and luminous landscapes which are the guarantee of an authentic stay in a preserved environment. Despite it is classified as a biosphere reserve by the UNESCO and integrated within the Marine Natural Park of Iroise, the island is very close to one of the busiest maritime routes in the world, the Ouessant Rail, through which some 150 ships transit daily, with a yearly total of 5,000. 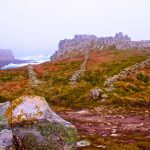 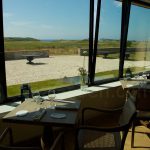 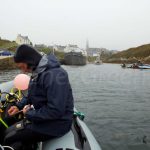 Fairy dive in the Iroise Sea with Ouessant-Subaqua » Diving 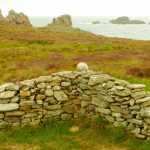 The most westward land in France, Ouessant stands above the sea at more than 20 Km off the coasts of Finistere. This is a real island with a plateau that culminates at 60m above sea level. It already was during the glacial era, some 12,000 years ago. It is the most westward fragment of the Armorican peneplane and is separated from the mainland by the Passage of Fromveur, whose strong and cold sea current is feared by all navigators. Depending on their exposure to the winds and their geological composition (granite and mica schist), the coasts of the island are steep or adorned with beautiful bays of white sand, but they all offer an imposing view.

The southeastern coast is covered with short moor grass, heather and gorse while the verdant small valley of Arland houses the rare trees that grow on the island. The gardens are planted with camellia, fuchsia, agave, aloe and agapanthus trees which are wetted by the sea sprays and benefit from the gentle climate that prevails all year round.

This 8 Km long and 4 Km wide island has the shape of a crab claw, with two points that surround the bay of Lampaul, the main village, in the west.

The island counts about 850 inhabitants (2005 census). In slightly more than 30 years, from 1968 to 1999, the population of Ouessant has decreased from 1,800 inhabitants to 930 mainly due to massive migration to the mainland.

The climate of Ouessant is tempered by marine influences

The island has a mild and constant temperature. It indeed has one of the lowest thermal amplitudes in France : 8.5°C (an average temperature of 9°C in January and 17.5°C in August). If rainfall is less abundant than on the mainland, dominant western winds blow all year round – the Kornog (west in Britton language) is an often violent wind. There is a yearly average of some twenty storms with peaks in February, when winds can reach force 9 (41–47 knots) and more on the Beaufort scale. Gusts of wind with peaks at 180kmh have often been recorded at the Creac’h semaphore and the island has namely been declared a disaster area in 1930 and 1960.

Ouessant has extensive areas of heathland and its coasts have been cut jagged by strong waves from the Channel and the Atlantic Ocean, which only left a few pebbled beaches. It is an exceptional destination for sea fanatics and naturalists at heart.

Integrated within the Regional Natural Park of Armorica since 1969, Ouessant has been declared a Biosphere Reserve of the Iroise Sea together with Molene by the UNESCO in 1988. It also forms part of the Marine Natural Park of Iroise, created in 2007. The island counts over 500 plant species and is an important ornithological reserve. Ouessant has between 150 and 200 species of resident birds and welcomes over 400 migrating birds each year. From spring to the end of summer, the Centre d’étude du milieu d’Ouessant (CEMO, Ouessant Habitat Research Centre) and the Centre of the Regional Natural Park of Armorica offer nature animations that enable the discovery of the avifauna and the natural habitats of Ouessant. Located near the Creac’h lighthouse, The CEMO welcomes amateur observers and scientists all year round since 1984.

A waste collection centre is now operational on the island.
To organise, sort and recycle waste on the island, the Pointe Sud environmental association has set up a commission to ensure that the requirements and procedures are complied with. The association strives for the restoration of the superb site of Penn ar Roc’h, which is one of the most beautiful viewpoints of the island and which was used as a dumping ground in the open.

Electricity is produced in Ouessant by 2 diesel oil generators that require 1.8 million litres of fuel yearly ! To curb down its energy supply costs, which are high due to its state of isolation, a programme for energy management and the production of renewable energy has been implemented in July 2009 by the Regional Councils of Brittany and Finistere, French energy provider EDF and the French National Environment and Energy Agency (ADEME). The inhabitants of Ouessant have received energy-efficient light bulbs and water savers free of charge. They also benefit from a 60% grant with a ceiling of €300 for the purchase of a more ecological refrigerator.

The programme also allows a decentralised production using renewable energy sources. The installation of two windmills by the French electricity company did not prove successful : the first one did not withstand stormy weather while the second one never entered in service…

A windmill project named Sabella D10 is being launched. It will be immersed in the Fromveur passage, where the powerful sea current close to the island’s shore can reach 9 knots, i.e. 16 km/h. Activated by incoming and outgoing currents, this windmill with a 10 m diameter blade is likely to supply up to 500mW of electricity yearly, thus providing for 40% of the energy consumption in Ouessant. In the context of a windmill farm project named Eussabella, three additional underwater windmills will be installed.

Maritime environment of the island

With its islets, rocks that just break the surface of the water and mythical lighthouses, Ouessant is considered as a favourite place for navigation. The Passage of Fromveur, situated between the Molene archipelago and Ouessant, has strong currents reaching 9 knots locally and nearly 7 knots at half-tide in the deep waters throughout the passage. Navigation is extremely dangerous when the wind blows against the current and there is a significant sea swell. It is not recommended to navigate without a GPS location system and an electronic sea chart.

The lighthouses of Ouessant

Since the Amoco Cadiz disaster in 1978, maritime traffic is channelled through a special route called the « Ouessant Rail ». The Stiff tower houses the Corsen CROSS (Regional Operational Surveillance and Rescue Centre). Perched on a concrete pillar with tens of aerials and parabolic dishes, the centre’s team guides cargos through the rail and organises rescuing missions in case of ship damage.
Ouessant is like a precious gem « crowned » with 6 lighthouses. The Jument lighthouse stands in the open sea while the Kereon lighthouse is located in the Passage of Fromveur. The famous Creac’h lighthouse marks the border between the Channel and the Atlantic Ocean and serves as a navigation marker for the Ouessant Rail. Easily identifiable with its 55m high tower, it is one of the most powerful lighthouses in the world.

Ouessant could be called « Women’s island » as its economic activity was managed by women in the prolonged absence of men, who often embarked on long distance journeys with the State or merchant navy. The inhabitants of Ouessant then lived on agriculture, algae collection and livestock rearing (sheep, cows, pigs and small rustic horses). Part of the island was enclosed by low dry stone walls to protect the cultivations from the wind and spindrifts, some of which can still be seen today. The houses have been designed to withstand very bad weather and most of them still have white facades and shutters painted in blue, two colours that are traditionally associated with the Virgin Mary.

As from the end of the 17th century, « La Royale » navy warship established its base in Brest and requisitioned the islanders. This forced enrolment kept the men away from the island for long periods of time. The women then had to take things in hand to ensure their survival, mainly through agriculture. The people of Ouessant were involved in all the battles against British naval forces in the 18th century. Under the reign of Louis XV and Louis XVI, many of them gave their lives for the service of the king. Later on, they enrolled in the navy to take part in colonial ventures. Towards the end of the 19th century, a majority of the islanders were either fishermen or were lifeboat crew for the SNSM, French National Sea Rescue Society, which is in service since 1865.

Only a handful of fishermen permanently live on the archipelago nowadays given that the people of Ouessant have never succeeded in making fishing their main activity, as it was on neighbouring islands (Molene and Sein). Despite a seabed rich in fish off its coasts, Ouessant does not have a natural harbour to accommodate fleets of fishing boats. The inhabitants of Ouessant thus enrolled in the Royal Navy, which established in Brest in the late 17th century, and later in the merchant navy. While the men were out at sea, the women had to fend for their daily needs and cultivated rye and barley, reared horses, cows and sheep and paved the roads with stones.

Until the end of the 19th century, connections with the mainland were rare and the island lived near autarky. The setting up of a regular boat service and a rise in the pay of the men led to the gradual decline of agriculture and use of the land. The little black sheep that were reared on the island for their wool have left the place to white sheep, which are reared in the open essentially for their meat. Towards the end of the 19th century, many artists of different fields have fallen to the charms of Ouessant, finding inspiration in its rough and luminous landscapes as well as its peculiar history.

The first tourists landed on the island in the 1850s with a noticeable increase in 1880 when the first steam mail-boat, « La Louise », came into service. Tourism is presently the main economic activity of the island, which welcomes some 10,000 visitors every year. The rough and bright landscapes of Ouessant and its peculiar history are an infinite source of inspiration, attracting artists since the late 19th century. Jean Epstein was the first film-maker to take interest in the island with his short movie, Finnis Terrae.

The Women Musicians’ Encounters and the Island Book Fair have become very popular cultural activities and have enabled the development of qualitative tourism, with longer stays. It is a trend that the inhabitants of Ouessant hope to step up.

In the same spirit, the Ilophone festival was created and is held every year in September, out of the tourist season. The singer, Christophe Miossec, who has the headquarters of his fan club on the island, created the festival with his fellow singer and friend Yann Tiersen, who has namely recorded an album there.