Molène is barely visible from the coast and appears like a tiny dot at the farthest end of Brittany. Located between the point of Saint-Mathieu and Ouessant, the string of verdant islets of Molène is bordered by beaches and white pebble stones, and thousands of seabirds nestle in their masses of steep cliffs. The archipelago has a very rich natural heritage and it is home to one of the rare groups of bottlenose dolphins as well as the largest colony of grey seals on the French coasts. This true haven of natural wilderness is protected by the Conservatory of the Coastline, it is a natural reserve, a hunting and wild fauna reserve, a biosphere reserve and lastly, a marine natural park. All these measures interweave with each other to ensure the sustainable protection of the site and enable collective work among the multiple stakeholders involved in the management of natural spaces, all the while preserving the economy and the traditions of Molène. 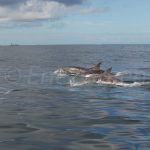 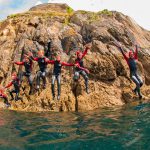 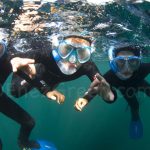 Geographical highlights of the destination

During the glacial era, the Molène archipelago was a gigantic peninsula of some 300 Km2 attached to the mainland. The rise in water levels brought about by the melting of glaciers transformed this peninsula into a dozen islets. The archipelago is currently composed of the main island and some fifteen islets.

The archipelago is currently composed of the main island and some fifteen islets.

Over 210 inhabitants still live on this small rounded piece of land which stretches over less than 1 Km long and 900 m wide, with a surface area of 75 ha. The houses in Molène are concentrated around the harbour, in the south-east of the island. Molène, which means « the bald island » in Britton language, owes its name to its flat and treeless landscape.

Weather conditions of the island

The climate in Molène is like that prevailing along most of the Finistère coast, mild in winter and cool in summer. The thermal amplitude between winter and summer averages does not exceed 10°C. Without talking about a « micro-climate », the island often gets more sunshine than the mainland. Yet, given its geographical situation, the island is exposed to particularly rough climatic conditions due to the combined action of heavy swells, generated in the open sea by the wind and tidal currents, which are among the roughest in Europe. Sea conditions can sometimes be highly dangerous between the reefs of the archipelago and are feared by sailors.

There are no cars in Molène to the exception of 3 or 4 vehicles used on the island for utilitary purposes, such as the taxi, which is a practical means to transport visitors to their accommodation for a modest fee. Besides, Molène has an ambulance as well as a small truck for garbage collection. Two-wheeled motor vehicles have been banned some twenty years ago.

Rainwater is collected in individual cisterns as well as an impluvium (small pool) that was built in 1976. However, the island is totally water sufficient only since 1989, when the water diviner, Pierre Stervinou, discovered an underground water source. Water rationing on the island came to an end after three boreholes were drilled at 21, 23 and 52 metres deep following the discovery.

Electricity is produced in Molène using three generators of 150, 225 and 320 kVA which consume over 100,000 litres of fuel oil a year. A programme to curb energy consumption and produce renewable energy was implemented in July 2009 by the Regional Councils of Brittany and Finistere, French energy provider EDF and the French National Environment and Energy Agency (ADEME). The inhabitants of Molène have received energy-efficient light bulbs and water savers free of charge. They also benefit from a 60% grant for the purchase of a more ecological refrigerator. The programme also aims at encouraging decentralised electricity production through renewable energy up to 75 KWp from photovoltaic panels. The programme aims at reducing energy consumption by 16%.

Maritime environment of the archipelago

Molène is one of the wildest spots in Brittany. A true natural haven renowned for its preserved fauna and flora, it is visited by leisure crafts in summer.

The archipelago sits on a reef plateau and among rocks that just break the surface of the water. It is thus strongly recommended to check weather conditions and tides and to have a proper map to navigate in its waters.

If the weather is fine, the archipelago is a haven of peace based on the clear and turquoise waters, however people knows that the sea can change its mood and the saying « Who sees Molène sees his sentence » takes its full meaning. The sea can become very dangerous : it washed away the bell tower of the church during a violent storm in 1971 !

A significant amount of regulatory mechanisms related to nature protection aim at preserving the richness of the Molène archipelago : its sites are protected by the Conservatory of the Coastline, it is a natural reserve, a hunting and wild fauna reserve and a biosphere reserve, amongst others.

Managed by the Regional Natural Park of Armorica since its creation in 1988, the biosphere reserve of the Iroise Sea is the only insular biosphere reserve of Metropolitan France. It benefits from the proximity of a coastline and sea research centre based in Brest. It stretches over 20,600 ha and comprises the inhabited islands of Ouessant and Molène as well as an archipelago comprising some twenty islets located on the Council territory of Conquet.

Biosphere reserve of the Iroise Sea

Created in 1992, the Marine Natural Park of Iroise has enabled the banning of hunting and picking as well as control access on the islands of Balanec, Bannec and Trielen, namely during the reproduction periods of birds such as the lesser black-backed gull (Larus fuscus), the herring gull (Larus argentatus), the great black-backed gull (Larus marinus), the sandwich tern (Sterna sandvicensis), the common tern (Sterna hirundo), the oystercatcher (Haematopus ostralegus) and the ringed plover (Charadrius hiaticula). The reserve has a total surface area of 39.5 ha and is managed by the Bretagne Vivante SEPNB association, which offers the opportunity to the public to discover these protected areas through the Centre for Island Environment, located in Molène.

Created in 2007, the Marine Natural Park of Iroise is the first of its kind in France. Its main objective is to protect a remarkable heritage and to participate in the sustainable development of activities relying on the marine environment. The marine park counts, amongst others, various species of seabirds as well as sedentary groups of bottlenose dolphins and grey seals. It also harbours more than half of the species of algae present in all European seas.

The underwater observatory Medon (Marine e-Data Observatory Network) was deployed in June 2012 off Molène to 20 meters deep. Real laboratory submerged, Medon transmits data on the seabed in real time through a 2 Km cable that connects it to the island. The researchers participating in the operation (ENSTA, Ifremer, the Plymouth Marine Laboratory and the University of Plymouth) can now monitor real-time currents, swell, salinity or temperature and conduct impact assessments of climate change or the evolution of marine mammal populations in an area with high human pressure (shipping, fishing, sailing…). The observatory also enables managers of marine protected areas to use these data to detect all forms of pollution and to better anticipate crises.

The heritage of the archipelago, a crucial issue for the future

Event if the whole set of regulatory mechanisms implemented over the years interweave in a multi-layered protection system, they still enable collective work among the multiple stakeholders involved in the management of natural spaces (the Bretagne Vivante SEPNB association for the islets, the Conservatory of the Coastline, the National Office for Hunting and Wild Fauna, private and public owners).
The preservation and discovery of the rich heritage of the archipelago are major issues for the future of its decreasing population.

Cultural and economic highlights of Molène

With its seabed abounding in fish and its well-sheltered harbour, Molène has always been a sailors’ island with coastal fishing as its main activity. While the boats belonged to shipowners from Conquet, crew members came from Molene. There are still three professional fishing boats, which ensure the preservation of some traditional jobs.

In the 19th century, soda ash production through the combustion of large brown kelp also provided a living for a number of seaweed gatherers from Molène and others from the mainland who arrived with their horses and tools to collect, dry and burn the seawrack. A stone-paved pit which was used to burn the seawrack can still be seen on the island and has been valorised.

Presently, the seabed of Molène, which is acknowledged as the largest meadow of algae in Europe, is presently exploited by seaweed gatherers from Plouguerneau. These seaweed gatherers of modern times use boats equipped with « scoubidous », some form of articulated arms used to collect algae.

Developed since the 1960s, the tourism sector currently generates an increasing share of the economic activity of the island. While masses of tourists land on the island for a day trip in summer, efforts are being made to encourage them to stay longer all year round to enable a better valorisation of the island and generate further revenues.

Major historic landmark of the « Molènais »

The inhabitants of Molène were renowned as excellent sailors and heroic lifesavers who never hesitated to join in the most perilous sea rescue operations, including the famous shipwreck of the Drummond Castle, a British cruise liner, in 1896. The namesake museum on the island is open to visitors and it is still possible to see water tank offered by Queen Victoria to the islanders as a token of her gratitude for the heroic rescue of her shipwrecked countrymen.