Martinique is an island which has the chance having proper nature with a variety of amazing sea landscapes. The Primeval forests on the volcano foothills and the savannah-type vegetation in the south are also some of the landscapes that make up the hinterland. 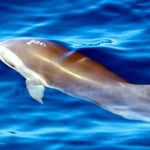 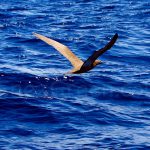 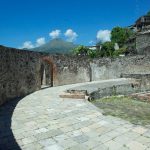 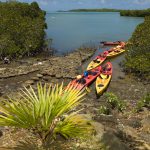 Kayak trip in the Mangrove of Trois-Ilets » Kayak

The legendary island of Martinique forms part of the Island Arc of the Caribbean with Dominica to the north and Saint Lucia to the south. It takes great pride in its economic development and achievements which make many other island states in the region jealous. The island is easily accessible thanks to its international airport but is somewhat away from certain tourist circuits as its airspace remains closed to competition. The accommodation capacity is limited but some good to very good quality facilities are available for lodging, enabling you to fully enjoy the charms of the island.

An impressive and diverse variety of sea landscapes follow on from each other. In the north of the island, the steep and rocky coasts dive into the sea while in the south, the almost lagoon-like sea is rimmed by beautiful white sand beaches which are a must for various water activities. In between, you will be delighted to discover a wild rugged coast and a multitude of coves with sandy bottoms on the Caribbean side to the west.

On the Atlantic side to the east, it will take you more than a day to fully enjoy the great charm of the Caravelle Peninsula and its islets and discover all of their secrets.

The people of Martinique are friendly and welcoming and you will be able to roam around peacefully. A number of tourist venues are available for visitors and enable you to explore the charms of nature in an eco-friendly manner.

We can regreat that that local autorities did not see fit to create marine reserves capable of protecting the local natural heritage.

A pleasant climate in the land of trade winds

The temperature within the coastal band is mild all year round, ranging between 23 °C and 32 °C with an average of 27 °C. They are noticeably lower in the mountainous areas of the island. There are, however, two distinct climatic periods: the dry and fresh season runs from November to May and the risk of cyclones during that period is nearly non-existent. It is hotter and more humid during the rest of the year.

Trade winds prevail in Martinique during a large part of the year, bringing some relief from the heat. This makes the stay of tourists coming from colder climates more pleasant. The trade winds, whose average speed is around 20 knots, are ideal for the practice of various water sports. They are also important for those who want to sail around the island or travel by boat to the other parts of the Island Arc of the Caribbean.

The development of a nature protection policy is under way

The local people have been appalled by the number of delicate environmental issues that have emerged in recent years and have decided, through their elected representatives and associations, to take in hand a number of issues in order to preserve the landscapes, forests, environmentally sensitive areas and coastal regions as well as the biodiversity. Footpaths in many coastal regions are now equipped and maintained, enabling access in all safety as well as the discovery and preservation of various maritime areas.

Vast expanses of nature are protected following the setting up of reserves in places like the Caravelle region on the Atlantic coast, which is a must see. It is, however, regrettable that the adjoining maritime areas are not full-fledged and properly managed nature reserves like in some other island states. A recent report of the ACP-EU (African and Asia Pacific small countries) insists on the value of the marine and coastal environments. About Martinique (Failler and al. 2010) it is considered that 55 square kilometres of Coral Reef, 50 km2 of Sea Grass and 20 km2 of Mangrove are producing goods and services for an amount of 250 millions of euros!

These services include diving, snorkeling, leisure fishing, sea kayaking, self-catering, and so on … many of them are essential to the tourism development. The creation of a marine park is set in Martinique by the French Ministry of the Environment. According to the International Union for Conservation of Nature (IUCN), some marine resources such as lobsters, white sea urchins and queen conch are overfished in Martinique despite restrictions on fishing, while turtles poaching continues and coral reefs deteriorate. A marine park would both create fish stocks closed to fishing while putting in place plans to restore endangered species and habitats.

You will be pleased to know that skiff races are regularly held at different points of the island. The French equivalent for the word skiff, ‘yole’, is inspired by the Norwegian word ‘jol’, which means ‘canoe’. This ancient boat was used by fishermen in olden times. It was then called a ‘gommier’ as it was made from the trunk of the tree of the same name, the gum tree.

The fishermen enjoyed racing on the way to their fishing spots. Later on, races were organised between the different villages of the island. Nowadays, the slender and elegant skiffs measure over 30 feet long and their draft enables access in shallow waters. The sail area is significant, reaching up to 130 sq ft, which makes the boat unstable. The competitors thus have to lean out over the water on lengthy poles to keep the balance. Skiffs may be rigged with one or two masts. The one-mast type have crews of 6 people and up to 11 people for the two-mast type. These people are all rounders, sharing the usual tasks inherent to this type of sailing boat: steering, sailing tactics, manoeuvring the sheets and sitting out.

The most prestigious regatta is unquestionably the round Martinique race, which is run in 7 legs, with a prologue race. Held in August every year, it provides some quality entertainment to tourists. It is a unique spectacle to see these elegant boats with their brightly coloured sails standing out on the emerald tropical waters of Martinique. These boats can reach amazing speeds and the racers are true sportsmen. Indeed, the participants are quasi-professionals and most of the boats are sponsored by commercial brands.

Visitors can grab a taste of the festive culture of Martinique through the various animations that take place during this racing event. The music, catering, grills and punch tasting sessions will all enable you to have a good time while enjoying the contagious good humour of the people of Martinique.

The history of a name that takes you back centuries

Martinique was discovered in 1502 by Christopher Columbus and was long called Jouanacaera Matinino. Jouanacaera is thought to be the name given to the island by the former Caribbean Indians, meaning “Iguana Island”. The name was later changed to Madinina, meaning “Flower Island”. This name is still very often used and perfectly reflects the rich flora of the island. You will quickly succumb to the charms of its lush and colourful vegetation.